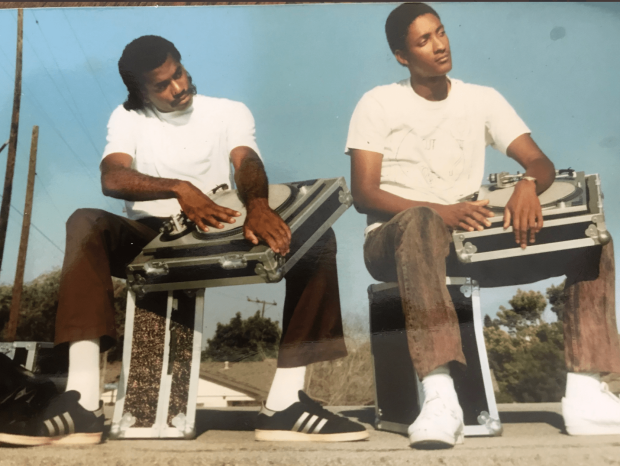 When you think of hip-hop in Long Beach the first artist that comes to mind is most likely Snoop Dogg. Teddy Styles is on a mission to change that perception with his new book which details the first generation of hip-hop in Long Beach prior to Snoop Dogg called “The History of Long Beach Hip-Hop”. Styles whose government name is Theodore Augerbright is a veteran of the music industry who once was signed to Capitol Records and formerly worked as a talent buyer at the Vault 350. “I was inspired to write the book because all of us early pioneers realized we didn’t really have stacks of pics and documentation from our early years,” Styles tells me. Styles decided to write the book to pay homage to the endless artists he has worked with and experiences he has had in the music industry in a career that spans three decades.

“The Hip Hop scene before Snoop in Long Beach was DJ Crews! Over in Compton you had The World Class Wreckin’ Cru with Lonzo and Dr. Dre, in Long Beach you had out of VIP Records “Master’s Of The 12’s” (DJ Slice, DJ Seany P and others), I started DJing in a crew called Jam Force Productions with my cousin DJ Antt (North Long Beach).“ Styles says.

Styles also discusses in the book his time DJing in a crew called Jam Force Productions with his cousin DJ Antt from North Long Beach. He was also part of his uncle’s crew Party People Productions and the San Diego Jam Company where he would DJ College School Jams for 18 and sometimes 21 and older events at the age of fifteen. “The hardest part about DJing in such an older crew was, I was the baby of the crew, I had to carry EVERYTHING!! Set up, sound check and pass my uncle DJ Swan his records while he cut, and I had to put back what seemed like thousands of records back in the sleeve in proper order! I also had to hide the fact from my parents my uncle had me in 18 and 21 and over events, he promised my parents he wouldn’t! (laughing)”

When asked if he felt Snoop Dogg overshadowed some of the original pioneers of the Long Beach hip-hop scene Styles replied “Snoop blew and it was surreal, straight to fame! He may have overshadowed us LB Pioneers some, but it was more about our generation not being fully united. Different crews trying to blow individually as well as separation by neighborhoods Eastside and Westside Long Beach. I’ve always been super happy for Snoop and a huge fan of his nasal conversational type of flow.” A truly incredible historian of hip-hop history. Check out an interview with the respected hip-hop historian on Dusty Vision TV who plans to release the “The History of Long Beach Hip-Hop” in the near future!!