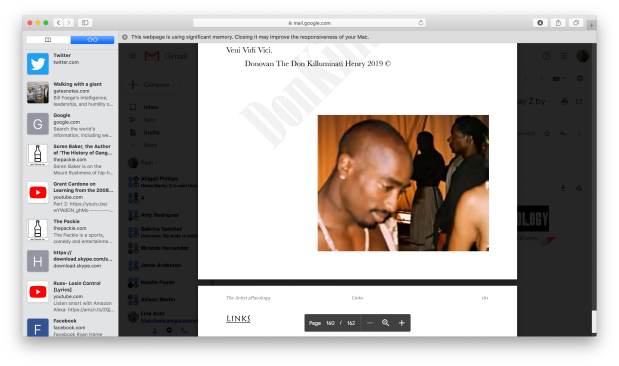 Tupac Shakur with Choreographer/Dancer Donovan Henry pictured in the background.

Many would dismiss Donovan Henry’s book 2Pacology as a “money grab”. The book has some hyperbole such as Henry’s claims of solely being responsible for making Tupac a “household name”. 2Pacology value lies in it from a historiographical perspective, documenting often forgotten about historical hip-hop events involving hip-hop stars such as LL Cool J, Puffy, and Tupac. Henry who was one of the most sought after dancer/choreographers in the 90s and very likely served as a mentor/confidant with the artists name dropped in the book such as LL Cool J and Tupac. It also is not beyond the realm of possibility that Pac looked up to Henry as a mentor of sorts or that Henry shared his wisdom with him, was the influence Henry had on Pac’s life as significant as he claims in the book? Probably not.

While some would look at the book as an attempt to take credit from one of the best selling music artists of all-time (Tupac has sold over 75 million records). One should probably view it as more of an ode to his former friend. Its cleverly written and has some practical advice for aspiring artists, chock-full of information that only an insider would know about the music industry and its also well researched giving insight into late 80s and early 90s hip-hop. With so much liberty taken in films and television nowadays, his life would make an interesting Netflix original series.

A truly overlooked talent in hip-hop, check him out teaching Oprah some dance moves:

3 Comments on Book Review: 2Pacology The Artist by Donovan Henry