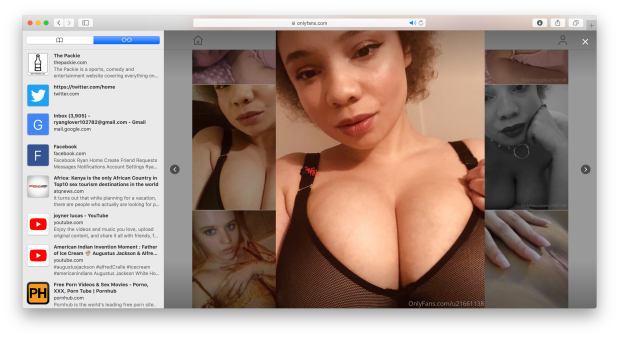 As a director Steven Spielberg has helmed some incredible films in his filmmaking career, staples in the black community such as The Color Purple. A legendary filmmaker behinds movies such as Jaws, Close Encounters of the Third Kind, or the Oscar Winning film Schindler’s List. That isn’t even mentioning his work as an executive producer. So it was certainly surprising that the acclaimed director’s adopted daughter Mikaela Spielberg’s preferred career choice was that of an adult star and it is has drawn quite a bit of notoriety the past couple weeks with much speculation about Mikaela being abused as a child.

Mikaela’s has stated she was abused as a child but claims it wasn’t by her famous parents. With that revelation it would be easy to write her off as wasting a “golden ticket” but I would counter Mikaela wanting to find her own way in life without nepotism is admirable. Plus it doesn’t hurt that Mikaela has breasts the size of a medieval maiden and serious girl next door vibes!!

The content on her Onlyfans would certainly garner a higher MPAA rating than any of her father’s films. On her Onlyfans Mikaela “earns her monthly subscription” which starts at a meager $10 per month. You also get a good deal of access to the budding sex star who also vlogs about her personal experience and has already racked up 1,300 fans.

The Nashville, TN resident who is in a relationship with a 47 year old white man recently discussed in a video on her Onlyfans saying “I Don’t Care About Your Color or Creed or anything” in response to a fan asking if she would date a black man. The 24 year old was recently arrested for domestic violence and perhaps should consider that alternative, considering our community’s penchant for not calling the police.

After checking out some of Mikaela’s videos I was impressed by her commitment to inclusivity and support of Veterans, as she offers first responders 50% discounts. I  can definitively say I would pick watching her Onlyfans over her father’s movies any day. Sign up for her Onlyfans https://onlyfans.com/sugarstar