Talib Kweli has some of the most racist and hateful fans in all of hip-hop. The rapper deploys them to make the most mean spirited of comments when someone disagrees with the rapper ideologically. Discussing the effects of immigration on the urban community led to one of his loyal followers claiming that horror actor Cynthia Garris was my spouse to shame me for being in an interracial marriage, which I am not nor is it anything wrong with it. His followers don’t share the same consensus and tried to shame me for being married to a white woman by taking a screenshot of a woman I’m pictured with unbeknownst to his fan of horror actress Cynthia Garris. 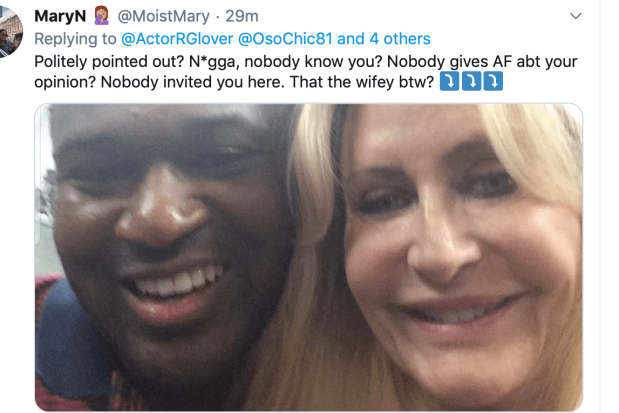 Me and Cynthia Garris in a photo one of Talib Kweli’s fans tweeted suggesting my wife was the horror actress to shame me for interracial dating.

Or even the attempts to defend myself led to his white followers calling me a white supremacist for supporting the President.  As a Veteran of the US Coast Guard I refuse to believe that Donald Trump is a white supremacist because of his commitment to criminal justice reform. Talib Kweli is more in line with white supremacy as he goes on negative platforms such as DJ Vlad which regularly feature segments about the most negative aspects of the black community such as illegal drug activity and stories of violence.

Attempts to defend myself led to the 44 year old rapper bragging about his 4 million dollar net worth. He also retweeted photos of my spouse and encouraged his followers to make rude remarks about the color of my children’s skin all because I support the President of the United States.

His followers making rude remarks about my children.

Mocking me for my past jobs in the entertainment industry and even past photos I’ve taken with other public figures. Even without engaging them, his followers continue to make rude remarks about my education, my spouse, and question my military service. Furthermore, they have found audition videos and portrayed me as a domestic violence abuser and created fake profiles posting false and damaging lies about my reputation.

He calls me a white supremacist for supporting Donald Trump, but I’m black.

He also mocked my religious beliefs and called me a fake Christian for his judgmental views. I believe that we all make mistakes but Talib Kweli judged me without having met me and sent this message to his 1.1 million followers. Labeling me a fake Christian which couldn’t be further from the truth. Considering he has his own skeletons in the closet which include past allegations of sexual harassment.

He also had his followers research the internet looking for the most embarrassing photos and anything that would disparage me and portray me in a negative light. When he found a costume of me dressed as a white penis, he posted that to his large number of followers even though it’s just a costume for promotion of a play he made it a race issue. If you believe Talib Kweli’s intolerance shouldn’t be tolerated #boycottTalibKweli 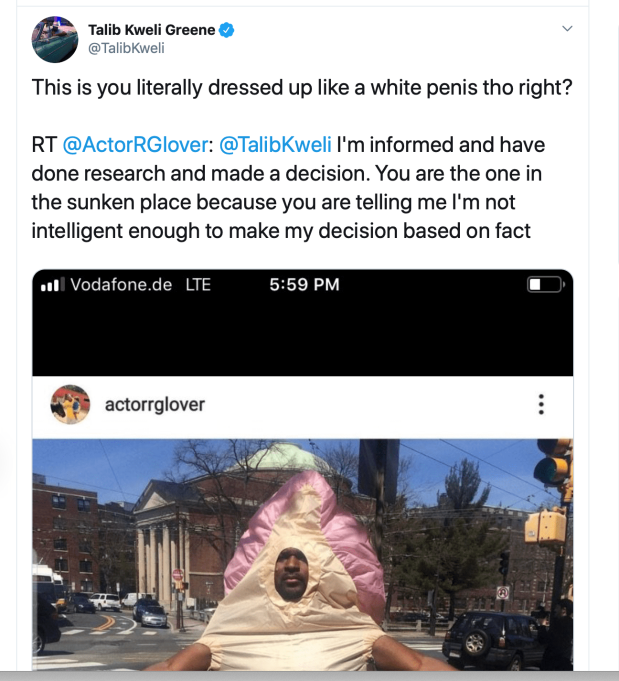 7 Comments on The Intolerance of Talib Kweli

The packie Courtside at the #Celtics glee tonight www.thepackie.com @whirlwindreports @ademattia84
Trivia tonight #trivia #trivianight #reverema #boston 7pm
Could we have seen #tb12 last game as a #patriot , an #nfl player or will he be on the pats again next year?