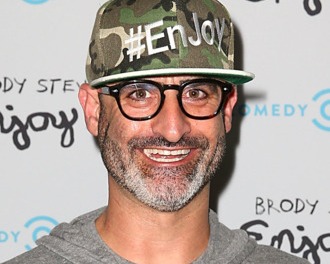 The world of Comedy lost someone special yesterday, February 22nd. Comic Brody Stevens was found dead in his apartment from what seems like an apparent suicide by hanging. Brody Stevens was an actor, podcast host, and stand up comedian who left his mark on many comics in the industry. Specially gifted as a “warm-up comic” Brody Stevens opened for a multitude of comedians over the years who entrusted him with the difficult task of opening a show. The comics, actors, and others who knew him, have only good things to say about this gifted man. He was 48 years old.

His contribution over the years consists of talk shows, films, stand up specials, and a podcast series of his own. His talk show appearances include Conan, Jimmy Kimmel Live!, Craig Kilborn, Tosh.0, and much, much more. He participated in major Hollywood movies such as The Hangover, The Hangover 2, and Due Date. In 2013 he filmed a half hour Comedy Central stand up special in our home city of Boston at The Royal Theatre. Lastly, he was an early participator in podcasts through his establishment of The Brody Stevens Experiment, which was created in 2010.

He was known throughout the world of comedy as a warm, fun, loving guy. His influence ranged from major comedic players such as Joe Rogan, and those up and coming like this website’s previously featured Craig Conant. It is unfortunate to learn that a man who had such a positive influence in the lives of so many, inspiring happiness, and bringing people together through laughter, left this world in the fashion that he did. He will be missed by many. His legacy will continue living through his work and memories of those who worked with him. Wherever he is now, let us hope that the happiness he brought to this world gives him happiness in the next.