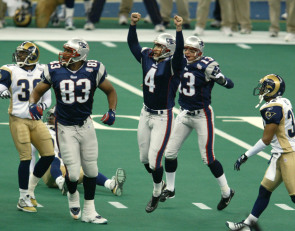 The year is 2002. Roughly five months have passed since the devastating attacks in New York City and the Pentagon. The country is still recovering from the shock, and Americans are seeking an outlet for their confusion, fear, and disheveled beliefs about the world.

The National Football League is in the middle of its regular season, and because of the horrific events that occurred in September, the league decided to take a week off from all regular season games.

The world of sports has always served humankind by teaching lessons of comradery, discipline, resilience, and respect from one human to another. They have always been used to satisfy some of our most carnal desires while simultaneously bringing us closer together as humans. Sports are loved throughout the world, because at the end of it all, we shake hands and everything is okay. The people who turned to the National Football League that year to find solace from the world events, witnessed the beginning to one of the greatest sports stories still yet to be concluded to this day.

In February of 2002, the St. Louis Rams faced the New England Patriots in Super Bowl XXXVI (36). A young Tom Brady, who got his start mid season because of a Drew Bledsoe injury had no business being on that stage, at that time, with that team. Regardless of his inexperience, he tasted success in the regular season leading them to a final record of 11-5. Even by proving to the Patriots organization that he can win, it still went down to the very last minute for him to be announced as the starting quarterback in that year’s Super Bowl game.

He faced a much more experienced, Kurt Warner. Quarterback of the league’s most dominating offense at the time. He had one of the best seasons of his career with a passer rating of 101.4, and was awarded MVP for the regular season. He had two lethal receivers, Tory Holt and Isaac Bruce. Additionally, he had the shifty, and practically untouchable Marshall Faulk leading the run game behind him. Along with other weapons, the Rams were the sure favorite. Dubbed, “The Greatest Show on Turf”,  because of their dominating offense. Their one achilles heel was their defense. It was one of the worst in the league.

Every football fan alive for that game, knows how it turned out. It truly was a Cinderella story, topped off by a fairytale like ending with Adam Vinatieri’s game winning field goal kick. Brady and Belichick made a name for themselves, and the New England Patriots organization did not look back. Since then, they have turned into the formidable force we know them to be today.

Seventeen years later. We have a brand new Rams organization. No longer in St. Louis, and now in Los Angeles. Lead by the young and promising, Jared Goff. Accompanied with weapons like running back Todd Gurley, and receiver Brandin Cooks. Not short of talent, he now faces the legend – not the no-name – Tom Brady, and his Patriots. The roles have switched.

One can not help but think if Brady has reflected back to when he was in Goff’s position. If you are a New England fan, one must hope that the Cinderella story does not repeat itself. It took seventeen years for these two teams to see eachother again at this level. The Hall of Fame veteran, versus the promising rookie. The poetry of sports written beautifully by the hand of time, as it may be the final pages of this beautiful sports story. How exciting it will be.