At a Beef O’ Brady’s restaurant in Florida (Florida of course) a young boy wanted a toy from the claw machine so badly that he decided to crawl inside to get it. Unfortunately, getting out is the tricky part.

I hated those damn things as a kid. Even then I knew they would screw me over and I would never get the toy I wanted. I always wondered if actually crawling up inside one was possible. I guess I finally got an answer.

Do parents watch their kids anymore? I’m not sure how old this kid was, but he certainly wasn’t in double digit age. How do you take your eyes off your child long enough for him to climb inside one of these machines?

I give the kid a little credit though. Instead of bitching and moaning like most kids about wanting a toy, he sprung to action and went after what he wanted. He just didn’t think it through with an exit strategy. 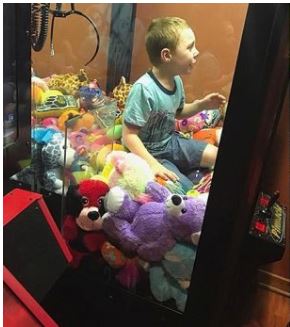 In the end it worked out for him. It took the fire department only five minutes to get him out and he got to keep the toy. No word if the parents were dumb enough to try & fish him out by pumping dollars into the machine & grabbing him with the claw first (source)