The film Wedding Crashers is personally my favorite comedy of all time. GQ recently thought it would be a good idea to revisit the 2005 film and see if it still holds up today. In the aftermath, they called it “uncomfortable—if not downright creepy—in 2018.” I call them a bunch of idiots.

We all know Wedding Crashers is a film about two guys (John & Jeremy) crashing weddings under fake names with the intention of seducing beautiful women for a one night stand. A writer for GQ had this to say. Let me just stream together some of the best parts. Then I will follow it up with my opinion.

“The endgame of all this subterfuge is a one-night stand with a hot woman, and it’s here that Wedding Crashers’ basic premise tips from sketchy into creepy. An energetic montage at the start of the movie chronicles Wilson and Vaughn’s incredible success, with topless woman after topless woman tumbling into bed with them. It moves fast enough that it’s easy to overlook that these women have been prodded into one-night stands with men who have literally told them nothing but lies:” I think this writer is putting women on a pedestal a little to much & trying to capitalize on the women’s movement for readers. I actually think his opinion makes women sound completely helpless & weak. I guess women are just so damn vulnerable. They can’t control their own actions & are so easily seduced. Did he ever stop to think that maybe some of these women wanted a one night stand also? Men aren’t the only ones capable of this behavior. The way they act is no different than trying to hookup at a bar or club.

“They pick cartoonishly stereotypical pseudonyms to fit each wedding: Lou Epstein and Chuck Schwartz for a Jewish wedding, Seamus O’Toole and Bobby O’Shea for an Irish wedding, Sanjay Collins and Chuck Vindaloo for an Indian wedding. If they stumble into a cash bar, they flash a Purple Heart replica to ensure that they never need to pay for a drink.”  Seriously, is this writer trolling? Ever heard of blending in!? If I was going to crash a very traditional Jewish wedding, it might draw some attention if my name was Anthony Marino.

“Even in 2005, it should have been goddamn illegal to put a sassy racist grandma in a movie. Keir O’Donnell, playing a hunchbacked misfit who aggressively comes on to Vaughn, is an inexcusably unfunny riff on the old “predatory gay man” trope” While maybe not as blunt and prejudice as this grandma, a lot of people can identify with the racist grandparent or relative. That generation grew up with different views that are obviously not accepted today. She’s an out of place character. That’s part of what makes it funny. Lighten up. 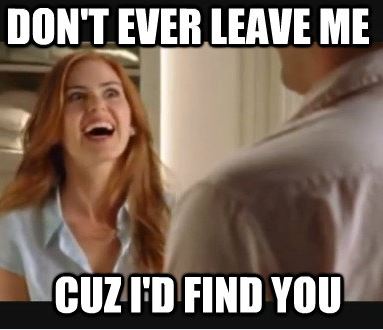 It is mentioned briefly in the article how Isla Fisher’s (Gloria) character is a sex nut.  “Vaughn, posing as a venture capitalist, ends up sleeping with Isla Fisher—who afterwards reveals, to his horror, that she was a virgin. It’s not until later that she confesses she was bullshitting him about being a virgin because she likes to tell guys what she thinks they want to hear.” That’s it? That’s all you have to say about Gloria? Alright, I can play this game too GQ! You want to call John & Jeremy creepy for hooking up with women at weddings, but Gloria gets a pass after telling Jeremy she would find him if he leaves her? That’s called stalking ladies and gentleman. It’s flat out illegal. Now, that’s creepy!

I’d be curious to see what movies this guy thinks are funny. I bet I could breakdown almost any comedy and find something about it that would offend someone. Who cares. Why so sensitive? Articles like his scare me! What’s next? Will we become so politically correct that older movies will be reedited so nobody feels offended? That would be boring. I hope not! (source)

5 Comments on GQ calls the film Wedding Crashers uncomfortable and creepy for 2018. I call them idiots.

The Arty 84 Show live tonight!
John Goodman ain’t looking to good
Can someone explain this?? I thought we banned all flights from Europe?? Why is there an inbound flight to LA from London?? And there are a lot more of these as well.