Amethyst Realm, a 27 year old woman in Bristol England appeared on a British TV show claiming that she has had sex with at least 20 ghosts, and has now looking to settle down with one.

Apparently this whole thing started when she and her then fiancé moved into a new home where she felt a strange energy. “It started as an energy, then became physical,” she told hosts Phillip Schofield and Holly Willoughby. “There was pressure on my thighs and breath on my neck. I just always felt safe. I had sex with the ghost. You can feel it. It’s difficult to explain. There was a weight and a weightlessness, a physical breath and stroking, and the energy as well.” Since then, all she does is bang ghosts. She claims to have had around 20 ghost lovers, and is now looking to get pregnant by one. (source)

What the hell do you say when your fiancé leaves you to go have sex with ghosts? Hell, I don’t even know what to say about this story! It sounds like failed cheesy early 90’s sitcom material. She weds a ghost. He tries to blend in with society.  The dialogue would be corny as hell.  I can hear it now.  “My boss doesn’t recognize me. It’s like I’m invisible.” Or, “what’s that matter hunny? Lately, you just seem so distant & hollow inside.” Cue the laugh track.

If having sex and getting knocked up by a ghost is possible, it certainly has some pros and cons. I can see the sex being very boring after a while.  You’ll never be on top. People will question your sanity as they constantly witness you pushing an empty stroller around.  Although, you’ll save a fortune not needing to buy clothes, diapers, or expensive formula. 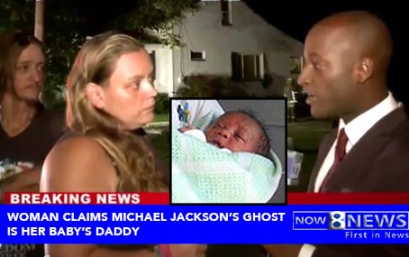 Hmmm, maybe it is possible. lol

“Realm isn’t the first person to claim to have gotten down with a ghost. Singers Bobby Brown and Kesha also say they’ve had supernatural sex sessions.”  HAHAHAHA Bobby Brown & Kesha!? Well, that was all I really needed to know in order to officially give this woman my looney bin seal of approval.