Paris Hilton hasn’t said or done anything stupid lately. We all knew that would change. Well, the time has come. In a recent interview Paris Hilton blamed her 2003 sex tape for destroying her chances for becoming a social figure like Princess Diana. Cue the violins.

“It’s really hurtful, because my whole life I really looked up to Princess Diana, all these elegant, amazing women, and I feel like [Salomon] just took that all away from me,” she said. “I could have been like that, but because of that tape, I will always be judged and thought of as whatever they say about me because of a private moment between my boyfriend and me.” (Source)

How so!? I’m assuming she knows nothing about Diana and just looked at a few photos of her wearing nice jewelry. Diana did a lot to help others and hated being in the public spotlight. That’s the complete opposite of how Paris Hilton operates. What the hell has she done anyway!? Let’s take a look at the list of Paris Hilton’s life achievements.

First of all, she was still drinking and partying like an idiot even before the sex tape was released. Going forward, she won a 2009 award for best female celebrity fragrance of the year! Also, in 2009 she won a Fox reality award for “innovator of the year” Innovator of what? If it was for innovation in being an over-privileged dumbass, she might have a case. Unfortunately, I think shithead Scott Discick has taken the crown since then. Maybe Paris will get it back someday. Moving along, she also won a teen choice award in 2005 for best scream scene in a film! (House of Wax)  As you can see, Paris has really hit a homerun with achievements. Princess Diana was a humanitarian and philanthropist. Not only would I bet Paris Hilton has no idea what these words mean, I would go further and bet she thinks a humanitarian is someone who eats humans. 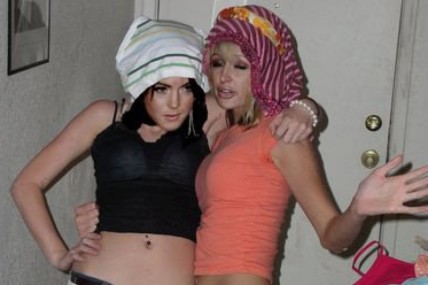 They say you are the company that you keep. Paris has certainly had some “elegant” friends over the years. Basically, if you’re a celeb who has done a stint in rehab, or a fame whore, you were probably best friends at some point.

I don’t even think I need to list all the achievements Diana accomplished. While Diana certainly had some demons, Paris Hilton will never come close to being the kind of woman Diana was.