You know this is pretty much a rhetorical question right? It’s amazing that a franchise could screw things up as much as they have. Hell, even a blind squirrel gets an occasional nut. From player decisions to the name of the team itself, let’s take a look at every aspect of why this franchise sucks.

Since 1999 they have had 25 different starting Quarterbacks 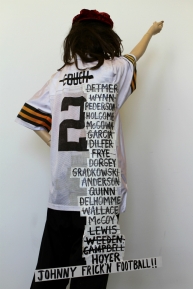 Yikes,  twenty five! Oh, no worries. This will soon be 26. That’s insane. Since 1999 the average for most teams falls somewhere around 10-13 different starting quarterbacks. The Browns somehow found a way to double that. I know finding an efficient quarterback can be difficult, but the fact that they haven’t even been able to groom or obtain a quarterback with a skill set along the lines of even a Kirk Cousins is pathetically laughable.

Nobody knows for sure how the Cleveland Browns got their shit colored name.

According to Google, “There’s some debate about whether Cleveland’s professional football franchise was named after its first coach and general manager, Paul Brown, or after boxer Joe Louis, who was nicknamed the “Brown Bomber.” Team owner Mickey McBride conducted a fan contest in 1945 and the most popular submission was Browns.”  This might have nothing to do with actual football, but if you can’t even get the story straight on how your franchise got its own name, it certainly might be a red flag that your franchise lacks organization.

So if you team name is “The Browns”, automatically your team is now forced to adopt that color. I guess brown is appropriate. They got this right. A shitty franchise like this deserves to be dressed as the color of actual shit. Why not change your mascot to Mr. Hankey from South Park while your at it.

We all know you aren’t guaranteed a superstar during the draft, but sometimes I wonder if their method for selecting draft picks involves chucking darts wildly at a bunch of names on a board. Furthermore, even when they make a good selection, they still fuck up. Look at WR Josh Gordon. He wasn’t a bust in terms of talent, but he has had many drug related issues and suspensions. I don’t even think I need to mention Johnny Manziel. I almost feel like they intentionally want to fail.

62% of likely voters in Ohio believe Ohio State would beat them if they played.

Nothing more sad than a fan base that has lost total faith. However, you can understand why. The Buckeyes come with a winning tradition. This is something the Browns are clueless about. (source)

By comparison, quarterback Tom Brady has 183 regular season wins since 2000. Actually, I don’t think it’s fair to use Brady as a comparison. He is an elite rarity. Let’s use someone more average. This year, Joe Flacco’s personal win total (83) could eclipse the Browns win total over the last 16 years. I also forgot to mention, Flacco didn’t start playing until 2008! That is how horrible the Browns are!

I truly feel bad for Browns fans and applaud those who are hanging on for hope that someday this franchise will turn itself around.

Last Arty 84 Show from our Revere studio. Listen and watch tonight live on Facebook Live at 7pm est. just search The Packie on Facebook to watch.
#nice #trump #warren2020
#pete2020 signs all over the #granitestate @pete.buttigieg