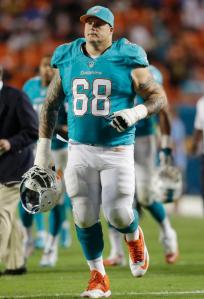 This whole Miami Dolphin fiasco is pretty comical. We have grown men crying that they had mean things said to them and we have big giant goofs thatdon’t understanding what they did. Only in Miami this could happen. If the team didn’t have enough problems of their own, they got this piled on. Richie Incognito is the best WWE character, right. He could be a manager of a wrestler and every time he talks, he puts his glasses on and says “I am Incognito”. How bad ass would that be, right? There is no doubt the Richie I is an asshole, but in the same breath there is no doubt Martin is a wimp. Its clear Martin has other motives then to get a big mess in trouble. Whatever the case is, pro football players shouldn’t be acting like a U-10 girls soccer team.