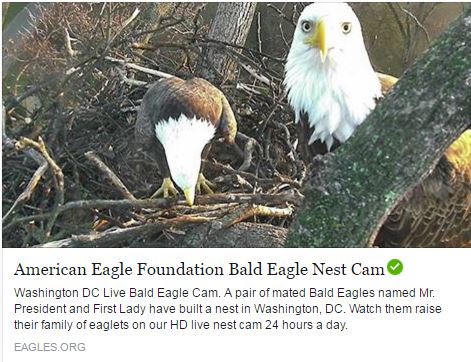 I am addicted to this. A bald eagle nest in DC for the first time in over 60 years. Two live cams watching these two patriotic wonders feeding and being birds is giving me moment. Here is what is going down on this site:

“In 2014, a pair of mated Bald Eagles chose the most idyllic of nest sites within the United States’ National Capital (Washington, DC), nestled high in a Tulip Poplar tree amongst the Azalea Collection at the U.S. National Arboretum, which is operated by the United States Department of Agriculture. This is the first Bald Eagle pair to nest in this location since 1947. The two Eagles have been ironically named “Mr. President” and “The First Lady.” Join us in viewing the most patriotic nest cam in the United States, 24 hours a day.

DC2 hatched at 8:27 a.m. March 18, 2016 Eastern Daylight Time. Pipping is underway for the 2nd egg. When hatched, it will be called DC3. DC1 was the first offspring of Mr. President and The First Lady, successfully fledgling last season. If you want to try and guess the hatch dates/times of the second egg, hashtag #dceaglecam on Twitter, Instagram, and Facebook with your prediction (Eastern Daylight Time).”

Thank you for viewing the Packie.com – The Packie and AE Podcast Network cost over $5000.00 a year to keep running, mostly paid out of the pockets of our writers. If you enjoy the Packie and The Arty & Eric Radio Show and the many Podcasts you can hear on here, please help us by donating to the Site. Every penny counts. Thank you in advance!