The Super Bowl has been around for fifty years! In that time, we have witnessed sets and costumes become more elaborate and musicians put on some memorable performances. However, they can't all be great.

These are some of the worst performances ever. Even if you don’t read this entire article, you need to see #1 at the bottom of this page to believe it. It is so horrible. 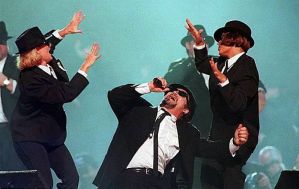 Do you want to see actors Dan Aykroid, John Belushi & John Goodman all dancing up on stage and singing the song “Soul Man” in full Blues Brothers attire like the middle aged men that they are? No, you really don’t. The annoyance of the trio really screws up good performances by ZZTop & James Brown.

Let me explain everything to you.

What the fuck is going on in this halftime show!? Talk about overblown. We start with just over two minutes before anybody sings so we can listen to a chorus play and see this elaborate set design and costumes. Then Enrique Iglesias & Christina Aguilera walk to the middle of the stage and start singing a song. I have no idea what this song is. I assume its from a Disney movie because that’s what it sounds like. At this point, its not bad enough to make the list yet. My tipping point is around the 4 minute mark. All the sudden actor Edward James Olmos appears and starts to narrate. Yes, I said narrate. He starts talking about spirits, earthly celebrations & aliens. Why did this happen? Did they think people wouldn’t understand the song so they decided “lets have someone explain it to everyone” The talking goes on for 2 very long minutes! Then Phil Collins takes over.

Nice to see Anthony Kiedis could show up looking like a child molester living in a trailer park.

I will admit, the first seven minutes of the show is really good. I don’t even like Bruno Mars, but I give him credit. He put on a great performance. Then someone thought it would be a great idea to bring on the Red Hot Chilli Peppers. Great idea right? I know when I think Bruno Mars, I think of the Red Hot Chilli Peppers. Its just a horrible transition that makes no sense. That would be like having Mariah Carrey perform then all the sudden, “ladies and gentleman, please welcome Metallica!!” 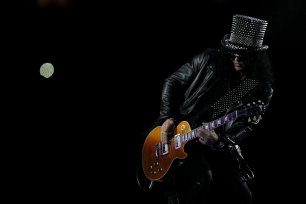 Anything you won’t do for money Slash?

On this day we got a reminder of how horrible the Black Eyed Peas sound live. They really should have lip sync’d this performance. Then without warning, at the 3:30 mark, Slash shows up to perform Sweet Child of Mine with Fergie. I don’t think I need to say anything else.

Why wouldn’t Harrison Ford not want to sign up for this?

Just shoot me. This halftime show was put together by Disney to promote the new Indiana Jones ride at Disneyland. Even for 1995, the costumes look lame and like they were stolen from a High School performance. At the 3 minute mark, Indiana Jones (not played by Harrison Ford) and his girlfriend parachute in to confiscate the Lombardi trophy from center stage. This “heist” is followed by an out of place performance by Tony Bennett. Also, Patti LaBelle performed.

Seriously, just click and see. It’s horrible. These two minutes sum everything up. Elvis Presto tries to perform a 3D magic trick on national TV. I suppose I should give some credit for trying something original, but it fell flat. Plus, its halftime on Super Bowl Sunday. People have already been drinking. Do you really expect them to follow along in 3D?