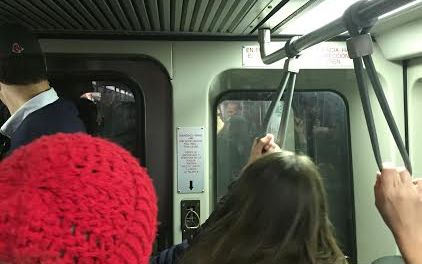 You can’t really see from the picture, but Saturday night around 8PM, My GF and I got on the Red Line at Park Street. A group of middle school or early high school kids were already on the train heading to Cambridge. They were being annoying by blowing a whistle and yelling. I ignored them being dumb, but then the train got stuck at the station for a few minutes and these little hoodlums decided that they needed some adventure in their life. They thought it was a good idea to stand between train cars between Park Street and Charles MGH and ride the train on the outside. Now I’m always up for adventure, but I am also not dumb (some may say otherwise). If the train would have took a sharp turn, I and the rest of the train, would of witnessed children being thrown, dragged and killed by a subway train. If you ever seen between cars, there is very little room and when there is 4 people, there is even less. Maybe when stuff like this happens, its evolution working its way out? But please don’t have 200 people have to be scarred for life watching you die doing something stupid please. PSA to all the kids out there, and some adults, don’t be like these kids. Thanks…. rant over Go Tom Brady.

Team bill with the win #teambill #patriots
This Was a post in regards to #victoriasecrets closing 250 stores. 2 boobs talking about boobs lol