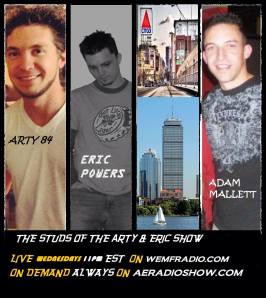 Arty and Adam live in Studio drinking beer that has been sitting in a care for two days. Eric had a situation and couldn’t make it in. The boys recap the summer so far. It has been abut 2 months since they were on the air. The boys talk about fantasy football and what guy celebrity they would fool around with. Adam talks about a wedding he went to and how much of a dick the groom was. Arty talks about his western Mass/New York adventure the weekend before. He and B Rock went to that creepy small town called Cooperstown and a night in Syracuse. Sean Connery showed up to the show and Adam talks about retiring at 33. Arty talks about how his stand up was featured on Rich Vos and Bonnie McFarlane and they ripped it to shreds. It was Episode 179 of “My Wife Hates Me” and about 30 minutes in. The boys talk about having relations with Justin Bieber’s mom. The boys conclude talking about sex positions that people really don’t do. This show is brought to you by The Pack [dot] Com http://www.ThePackie.com for all your sports, chicks and drinking needs and DJ Arty 84 Entertainment – http://www.DjArty84.com – Also a whirl wind report by Adam Mallett. Show produced by Dave of WEMF Radio @wemfradio – http://www.WeMfRaDiO.com